My Rembrandt is set in the world of the Old Masters and offers a mosaic of gripping stories in which unrestrained passion for Rembrandt’s paintings leads to dramatic developments and unexpected plot turns.

While art collectors such as Eijk and Rose-Marie De Mol van Otterloo, the American Thomas Kaplan and the Scottish Duke of Buccleuch show us their special connection with ‘their’ Rembrandt, French baron Eric de Rothschild puts two Rembrandts up for sale, triggering a hard political battle between the Rijksmuseum and the Louvre. The film also follows aristocratic Dutch art dealer Jan Six as he seems to be on the trail of not just one but two ‘new’ Rembrandt paintings. This nerve-wrecking journey of discovery seems to be the realization of his biggest boyhood dream.

The film My Rembrandt allows us a fascinating insight into what makes the work of this Dutch master painter so special and why his work touches people so deeply.

My Rembrandt will be shown in the Dutch cinemas from 3 March 2020 !

The film is distributed in the Netherlands by 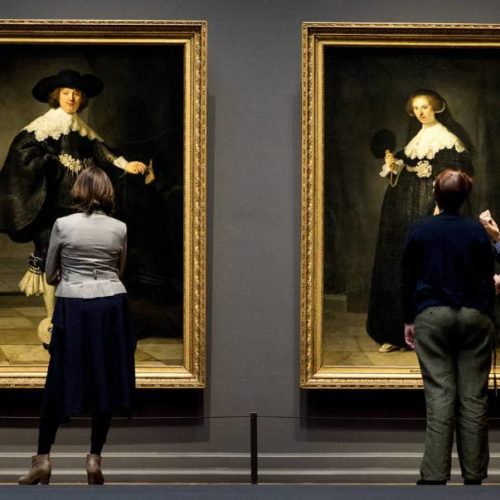 Nothing but beaming faces at the presentation in Paris of the Rembrandt paintings known as Marten and Oopjen, four years ago. But appearances were deceptive.

The documentary ‘Marten and Oopjen – Portrait of a Marriage’ makes painfully clear how passionately and doggedly the Rijksmuseum fought to acquire not one but both portraits for the Netherlands.